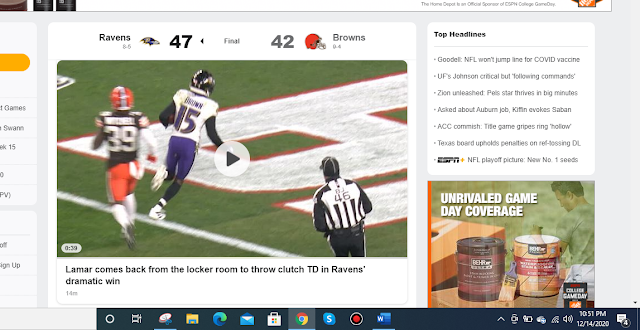 The Cleveland Indians announce a name change and the next day the Cleveland Browns lose to the Baltimore Ravens on Monday Night Football....

The Ravens were formed due to Cleveland Browns owner Art Modell trying to move the Cleveland Browns to Baltimore...thus creating an expansion team...so both of these teams are important to Cleveland.   Think about how this is similar to changing a team name too...

Notice the Cleveland Cavaliers won with 116 points over the Indiana Pacers too....Indiana is the land of the Indian...

Notice yesterday was 1 month 16 days or 47 days after the 116th World Series too.

If you watched the Ravens game, it ended with a safety which made the Ravens win with 47 points.

Recall that the Ravens beat the 49ers in Super Bowl 47 which was the same season that Art Modell died....He died on 9/6...

The Ravens established in 96'.

The Native American Theme in 2016 was related to my hometown..

There was a lot going on with that Native Theme in 2016...I was having syncs with the College World Series that had Arizona vs Coastal Carolina...then Kyle Calloway died in Vail, Arizona...and I also talked about Vail, Colorado because of a Amtrak Derailment in Colorado....Yellow Smoke Park is located between Denison and Vail, Iowa.....I had moved to Arizona on 11/6 and had a synchronicity at the "Grand Canyon"=116.....the same day Boys Scouts died in Little Sioux, Iowa...the Omaha's brought the Mormons for protection from the Sioux....

Moral of the story 116 was important to the Native Theme that year....The next big theme was the Space Theme and Eugene Cernan died on 1/16...

Super Bowl LV will be held in "Tampa, Florida"=116 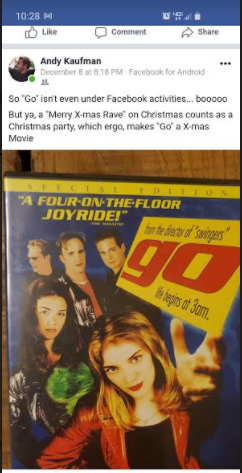 I am supposed to see something with this 38 number too...I just blogged about my sync with Katie Holmes and Nick Stahl...and the next day at work one of the first posts I saw on Facebook was about the Katie Holmes film "Go"...A few seconds later a new song started playing on my coworkers phone and it was a song I always associate with Dawson's Creek...."I'll Be" by Edwin McCain..

Further, notice the comment about the film "Go" involves the word "Rave"..makes me think of Ravens...I've never seen the film, but apparently it involves a Rave....I further know it's important to Football, because the guy who posted it looks like Tony Romo and lives in the Dallas area..

The same day I had this sync, I text Sam back because he has been having syncs with Roald Dahl...I told him that I haven't had anything more happen with him, but there is for sure a Dawson's Creek theme....He then asked if it was from the South Park Dawson's Creek Trapper Keeper episode....I told him no, but then I had to laugh because I remembered that episode is spoofing the film "Terminator".....and Nick Stahl also portrays John Connor in the 3rd Terminator movie....so I've got to try and watch some of these things for some clues when I get a chance...

Further, all of this happened 2 months 24 days before James Van Der Beek's bday on 3/8..

Of course Joshua Jackson could be important as well...The Mighty Ducks...The Skulls...

The leading scorer for the Cavaliers was Dante Exum...notice his bday is 7/13, the same day the Redskins announced they were changing their name.

Posted by The Mindless Freaks(Dan Behrendt) at 12:56 AM