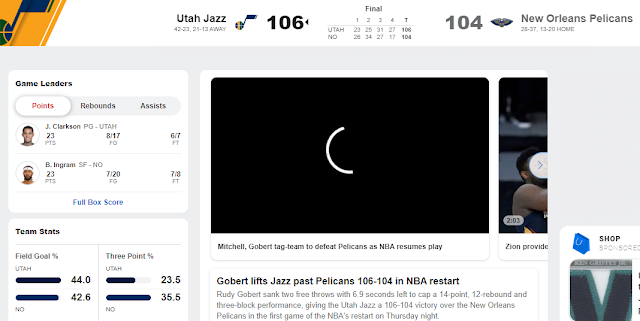 Rudy Gobert makes the first and last points of the opening NBA game after being suspended by Coronavirus. Of course, he was the first person to get coronavirus too haha.
Recall, the Utah Jazz are also important to Kobe Bryant and notice the top scorers for both teams. Jordan Clarkson and Brandon Ingram, both former Lakers...Clarkson played with Kobe and Ingram drafted just after Kobe retired.
Rudy Gobert=54, 135 and 187(FB)
Kobe Bean Bryant=54, and 135
New Orleans=54, 126
Recall, that Kobe's death was synced to DeMarcus Cousins tearing his achilles with New Orleans exactly 2 years before Kobe died. He did it against the Rockets, and his first game with New Orleans was against the Rockets.
DeMarcus Amir Cousins=126
It's all synced up to Kobe's achilles when Dwight Howard was on the team. This was in turn synced up to the Rockets as well. Plus Howard originally from the Orlando Magic, and I've shown how Orlando is important to the Lakers/Rockets.

The major number I documented about with Kobe Bryant was 34, and notice the NBA resumed 34 days after Rudy Gobert's bday too.
Rudy Gobert-Bougarel=234
Orlando Florida=234
Russell Westbrook=234
Recall, how the NBA resumed in connection to Westbrook and Charles Manson.
Posted by The Mindless Freaks(Dan Behrendt) at 1:05 PM