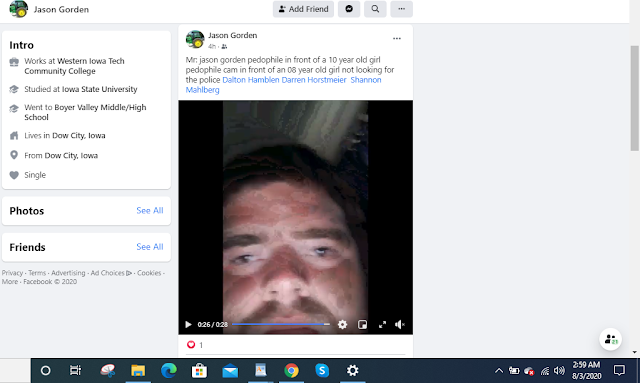 So earlier tonight I was writing about the Knights of Columbus and such from last post. I started the post hours ago, but I went to my parents house and just posted it a few minutes ago. Anyway, as I was thinking about the Knights of Columbus in relation to my last post...I always also think that most of the Knights I know are good people. I then started thinking about the kid in the picture above. He's like 19 years old and a Knight, and I honestly think he's a little "special", so I can't imagine him being a bad guy. Anyway, a few hours later I got a notification on my phone that he wanted to be friends on Facebook. I thought what are the odds I would be thinking about this kid and then get a notification from him. As I was looking at his page, I realized this was not actually him, as someone else made this page to expose him for being a pedophile. There is a video of him on webcam showing his dick, which I assume the caption is saying he was showing to little girls.....although who knows as that caption is confusing.
I just think it's funny that I was thinking about him, and how he is proof that the Knights are good people....and then I see this. It's also interesting as he is related to my uncle Barney on his wife Betty's side.
I can't remember if I blogged about it, but I had an experience with another Knight on Facebook not too long ago as well. He invited me to video chat with him, which I thought was weird considering I don't know him that well.
Another thing in relation to this post is that I also looked up Father Howard Fitzgerald earlier today too. I wanted to double check that he was 63 years old when he got kicked out of the Church for molestation....I've also been seeing about a million posts in regards to Hollywood pedophiles and what not... I get it, but at the same time it's obvious the cabal wants the world to do this.
Jeffrey Edward Epstein=218
Conspiracy Theory=218
They couldn't have scripted it any better. Where's Corey Feldman?
Posted by The Mindless Freaks(Dan Behrendt) at 3:27 AM