The CAT/KAT theme continues.
KAT....Karl Anthony Towns signing a 190 million dollar contract....Now today we get TIGER(Cat) Woods winning for the first time since 2013.

Also the Sunday Night game of  LIONS(CAT) upsetting the Patriots.

We also had the Bengals(Cat) lose to the Panthers(Cat) today.
Also the the Jaguars lost today too.
Now the Bengals, Panthers and Jaguars on 2-1...
Cat=21(rev red), 6
Notice the Bengals had 21 points...the Jaguars had 6...
It doesn't necessarily fit, but I wanted to document it regardless in case it makes more sense at a later date.

In my own life recently my Cat(Cuddles) had kittens again. She got outside when she had them though, but occassionally comes back to eat and what not. Also her other two kittens that we kept from the previous times have been driving me crazy lately.
Also remember in 2016 how my moms Cat went missing in December. My Aunt Betty posted a picture that looked like him on Facebook, but it turned out it wasn't him....Then her Husband(uncle Barney) died on 1/14...
It was 1 month 14 days before my moms bday.
Missing Cat=114
This was all after the Cubs had won the WS getting their 114th win of the season in their 114th season being called the Cubs and so on....
It's interesting to me too as this was the year Colin Kaepernick first took a knee....my Uncle's death was showing me the Miami Dolphins which in turn was showing me the Falcons.....
The Dolphins won again today becoming 3-0...

So Barney died in January 2017....then my grandma died on September 24th, 2017. Remember the day she died a girl I know from Woodbine had brought over baby Kittens that didn't have a mom to feed them. Our cat had just had kittens so I told her to bring them over and see if our cat would take them in...the baby kittens later died too. 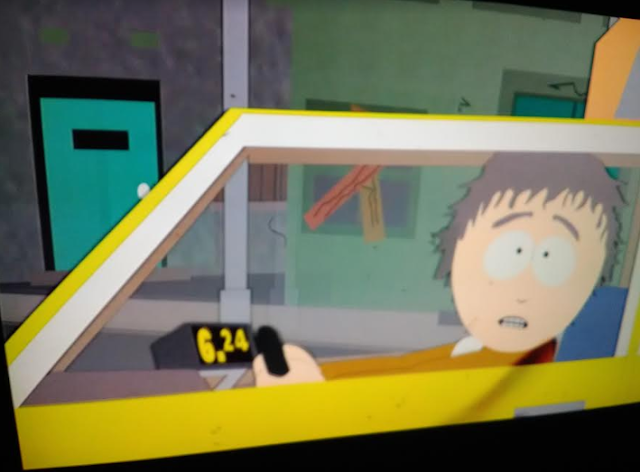 While writing the above paragraph I was thinking about how 624 was the important number to my grandma as well. It was also important to my uncle Clancy who died 6 months 24 days after her. I couldn't remember how Barney fit into that, because I thought he had some connection to it as well.....His connection was that he died 8 months 10 days before my grandma...Also the Flintstones stuff and the original Flintstones was called the FLAGstones.
8/10 is Rocky Colavito's bday...all the 624....
Anyway as I was thinking about 624 I randomly looked up and I hear the TV say, "How much do I owe You"...then the Cab driver says uh..."$6.24"...I don't even know how South Park got turned on either. Claire said she didn't turn it on and I didn't....Jasmine hates South Park...she had to have turned it on thinking I wanted to watch it when she left for work? I also started thinking how Claire shouldn't be watching this episode as it's about Jimmy getting Boners.
South Park=114
Claire=114
Thinking about Cats in relation to my Uncle Clancy too....his daughter Katie loves cats. She's like a young crazy cat lady.

September 30th is a day I'll be paying extra attention too as well. It will be 624 days after my uncle Barney died...The Falcons the black bird...remember he died just before getting to the town that the Falcons as their Mascot...then the Falcons lost in the Super bowl....

The past few days have also been crazy for me. I got a huge infection in my arm and had to go to the ER twice. It's the first time I've even seen a doctor in probably 15 years. I chewed my fingernail too low and it got infected and a giant red streak went all down my arm.
Anyway I went to the ER early morning on 9/22 and then later that night after I got done DJing a wedding. It's finally getting better it seems, but I could barely move my arm it was so swollen and infected. I can actually make a fist again...
Anyway last night my mom also won $15,000 at the Casino in Onawa, Iowa...The Casino is called "Blackbird Bend".....so just interesting the Blackbird again....plus in 2016 the big thing with the Indians in the WS was connected to the Omaha People who own this Casino.
Yesterday was 130 days before my moms bday on 1/30 and her maiden name equals 130.
Also one of the pills the Dr. gave me the morning I went to the ER said, DAN" on it. I thought that was funny too. Almost as if they knew I was coming.


Remember too a bunch of stuff in connection to my Uncle Barney was about Reverse Gematria...
Reverse Gematria=239(reverse)
Funny I'm documenting about this on 23/9.

Search "Cat" on my blog and you'll find the info I am talking about. In one of the posts I even mentioned the Detroit Lions in regards to CATS.

Posted by The Mindless Freaks(Dan Behrendt) at 11:45 PM