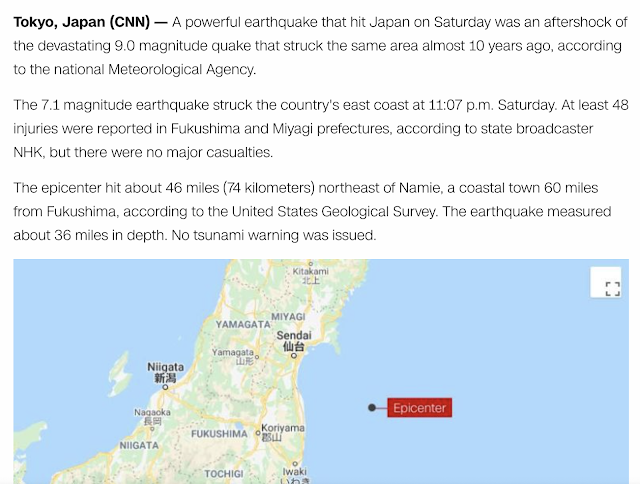 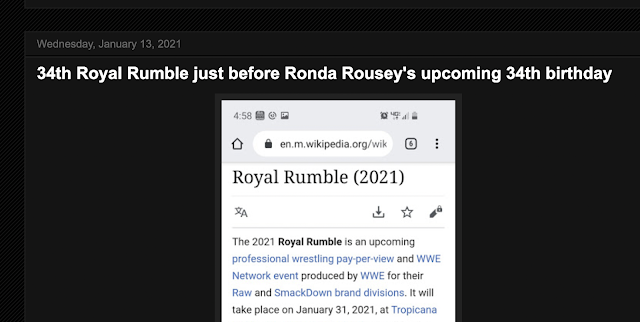 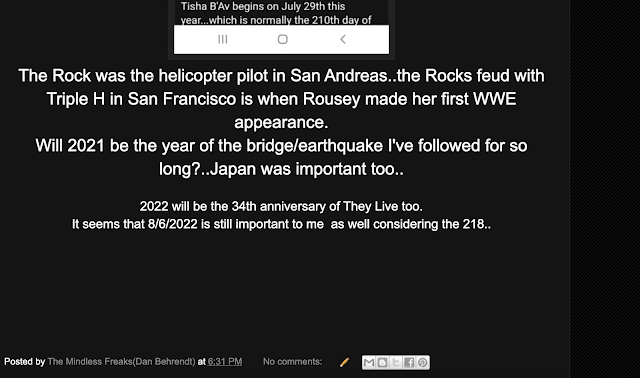 I knew Ronda Rousey turning 34 synced up to the 34th Royal Rumble was important to this. She also made her WWE debut announcing she will have her first match at Wrestlemania 34 at the Royal Rumble in 2018....at this Royal Rumble both the male and female winners were from Japan..
Royal Rumble...Earthquake..The Rock...
Plus Japan is important due to the atomic bomb on the 218th day.
Ronda Jean Rousey=185
Japan=185(FB)
World Trade Center=185
Now we get an earthquake on 2/13 which is the 44th day of 2021?
Earthquake=44 and 213(FB)
What's even funnier to me is that in one of the posts that I blogged about Japan and Ronda Rousey recently...I started the post off trying to figure out the significance of Alex Jones and Bill Gates on Jeff C's last video....I measured from 8/6 to 2/11 because it's when Alex Jones got kicked off social media and his bday...
I pointed out it was 190 days and Ronda Rousey has a bunch of connections to 190....but notice they are saying this earthquake is an Aftershock of the 2011 one...
Aftershock=211(FB) and 190(FB)
Although neither "Aftershock" or "Earthquake" technically have to be capitalized, it's amazing how perfectly the sync is when you do.
aftershock=106 and 43
They Live=106, 43

Don't forget that Los Angeles is prone to Earthquakes and it's in the 213 area code.

Kobe Bryant is synced to Japan...

In 2020 the winners were Drew McIntyre who was 34 years old at the time and Charlotte Flair who turned 34 years old the same day as Wrestlemania 36 and is currently 34 years old....

In 2021 they weren't connected to this, but the names of the winners are interesting...Edge...and Bianca Belair...Remember in 2018 a major thing was the Austin Bomber which was synced to Owen Hart dying at "Over the EDGE"...also the family who drove off the edge of a CLIFF...

Think about Bianca belair in regards to Bel Air..Los Angeles....Kobe Bryant synced to Will Smith...the Fresh Prince of Bel Air...Kobe all about the number 34.

Another thing that sticks out to me while looking this up...Becky Lynch's real name is Rebecca QUIN...notice she is from Ireland too.

She was once Rebecca KNOX too and Bianca Belair is from Knoxville, Tennessee....Nashville...Knoxville....Just trying to piece the puzzle together.

Think about the wrestler EDGE too...he is known for his tag team partner "Christian"....Antioch where the term Christian comes from and where Anthony Quinn Warner was from...also where the Mad Max shooting happened around the same time Ronda Rousey took on the name Rowdy after Roddy Piper died....Christian Bale is Batman...Recall the Cliff theme was also synced to the Ides of March shooting in 2019 at Christchurch...this shooting was synced to the Austin Bomber and Mail Package bomber in 2018...the same year Alex Jones was removed from twitter when the date 8/6 was really important.

I honestly think we need to pay attention to 8/6 in the coming years. It seems there is something very important to it.

Edge also retired from WWE in 2011 just after the Japan Earthquake.

Edge is also from Toronto where Summer Slam was held on 8/11/2019...the big day we were talking about with Tisha B'Av/Golden Gate/Earthquakes....recall this was after the Raptors won the NBA Finals synced to Kobe Bryant as well. Wrestlemania 37 will be in Tampa, where the Toronto Raptors are playing their games too.

Wrestlemania 37 will be held in Tampa instead of Los Angeles too.

The Japan earthquake was a span of 107 days after Edge's bday and 260 days before his bday.

260 the big number on the Nashville RV bombing.

Posted by The Mindless Freaks(Dan Behrendt) at 1:12 PM