Chip Kelly signs with 49ers and the Chiefs/Eagles coaching Rotation. 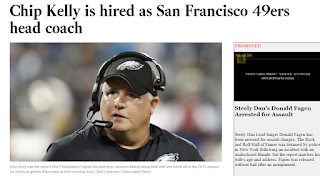 Kelly was hired to the Eagles because the Eagles fired current Chiefs coach Andy Reid. 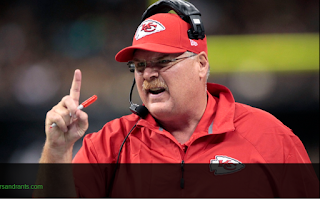 Andrew Reid=56, 101 (His real name) Philadelphia=101
This interests me because I've mentioned the Chiefs winning the Superbowl but the number 56 has seemed to be a "Bad" number.  Andrew Reid=56 really makes me wonder if I'm incorrect. There's so many other connections to the Chiefs though that I still think I may be correct. If I'm not though, it will be because of the 56 connections. Chiefs in 56th year of existence even. 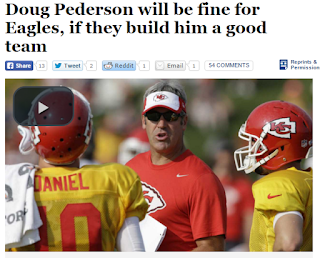 Doug Pederson is the current Chiefs Offensive Coordinator. The Eagles have said once the Chiefs Season is over they are going to hire him as Head Coach. He was born on January 31st.  Or 1/31. Superbowl=131

Posted by The Mindless Freaks(Dan Behrendt) at 12:58 PM