Lady I know on the Price is Right today 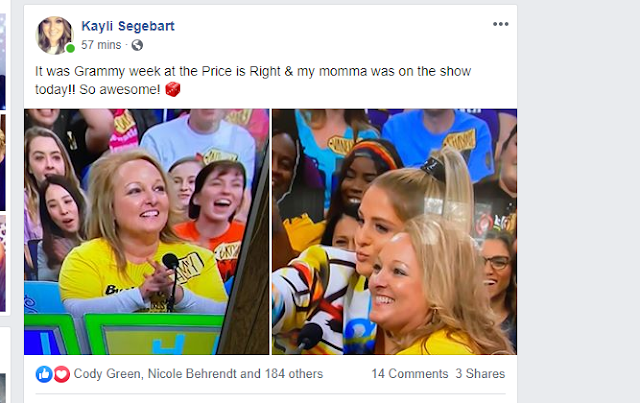 I woke up to this on Facebook. Apparently a lady I know made it on the Price is Right episode today...I can't help but to think she was chosen because they knew I would see it. I mean this because I have covered Jeopardy and the Price is Right probably more than anyone....even Terry Kniess reaching out to me before the Vegas attack...then Jeopardy of Champions ends on the anniversary of Barney dying which was in the same year of the Vegas attack.

I first met the girl who shared this as she worked at the Gold Slipper...important to Barney.

Even better is that these people are related to the CAREY family that lives around here...think about it...Drew Carey..
Remember Terry Kniess was in connection to the Jesuits/Father symbolism....I djed for the Carey's the night before Father's day and hit a deer on the way home in my father's car.

Remember too I had the synchronicity with energy drink the day before Amy's son died on 17/5 from energy drinks.
I was looking into energy drinks as my girlfriend drinks them a lot on 5/16 randomly. Then CNN posted an article about a 16 year old kid who died from energy drinks on this same day...I noticed that..
Energy Drinks=175
and the next day was 17/5 which was 175 days after my girlfriends bday.
She had just started a job at "The Cozy Corner"=175
Then on 17/5 I found out this lady's son died from drinking energy drinks age 16.
He died in 2017 in the same month I started documenting about the Price is Right for the first time.

I can't find the episode online yet, but I'll post more when I figure it out.

Posted by The Mindless Freaks(Dan Behrendt) at 1:01 PM