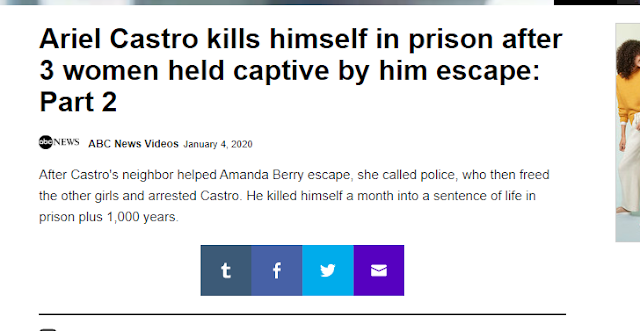 I just went to Yahoo and a few stories down I see a story about Ariel Castro. They must be making a 2nd documentary on the story or something as he killed himself in 2013....but remember this story was important to Batman...they showed the pictures of the victims on the screen but for the girl named "Knight" it was a blacked out image....the Dark Knight...this was less than a year after the Batman shooting.
A Real Castro...

I also checked my email today and I noticed a notification from Twitter and Ronny Turiaf. Apparently I got it yesterday, but I don't remember ever seeing it. I was actually in Omaha most of the day and didn't get back until about 4am so I didn't even check it. It's just funny as I was telling Sturgill about Ronny Turiaf last night and then today I check my email and see I have notification involving him from yesterday...
Ronny Turiaff=64, 136
The Dark Knight=64, 136

The Batman stuff I swear has to be important to the film Looper as well with Joseph Gordon Levitt...It's set in Kansas City, but also he goes to China in the film...It came out in 2012 after the Batman shooting....He's also in Angels in the Outfield that was important last summer with Tyler Skaggs..Also 10 Things I Hate About You with Heath Ledger(Joker).

I also wonder if Full House is still important...Remember Mary-Kate Olsen was part of the story in Heath Ledger's death....Jeff Franklin owns the Tate Murder house..
Posted by The Mindless Freaks(Dan Behrendt) at 5:41 PM