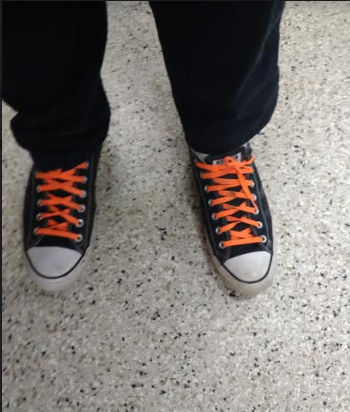 I blogged about these shoes and my friend Norm a few weeks ago. I went back to my old house a few days ago and finally found the other shoe. It was really dirty and I wanted to wash them before wearing them. I finally washed them yesterday and wore them to my band gig last night, and then I wore them to work today.
Guess who came in the store today? Yep, my friend Norm who I haven't seen in probably a year or so as he lives in Minnesota. I came out of the walk in cooler and he was standing by the coffee and I started talking to him. He noticed my shoes right away, because they were for his wedding. The last time I wore these shoes really was the day of his wedding up until last night too.

It's funny too as he bought everyone in his wedding a sports shirt with our last name and whatever number we wanted on the back. I told him I wanted the number 76, because I was trying to do it by gematria...
Behrendt=76
When I got my shirt however, he decided to put my nickname "Beartrap" on it instead of Behrendt....Like one of the only times I actually try and do something by the numbers and it fails...I've always wondered about it.. like it was almost as if some force said, Nope ain't happening.

He was telling me how he lives 5 hours away and they didn't come back for Thanksgiving because it had snowed. I thought he was living in Minneapolis, but he said he lives in Rochester now.

Rochester, Minnesota is where the Mayo Clinic that my uncle Barney left from before dying in a mysterious car crash. Oddly enough his father in law is a Knight of Columbus like Barney was...which was important to what I was documenting about. This doesn't mean he is a bad guy either, he's actually a pretty genuine person as far as I've ever seen.

It's also interesting that today is the 72nd anniversary of Aleister Crowley dying...Remember his bday is 10/12 which is the same day Columbus supposedly discovered America.

It's also interesting Barney died in connection to the Patriots winning the Super Bowl against the Falcons in Houston...The game tonight is the Patriots at Houston...


It's also interesting that I previously blogged how my uncle may have been at the Mayo Clinic in Austin, MN...but as I'm reading it now...it doesn't have the Mayo Clinic, but it has a cancer research center with support from the Mayo Clinic.....
It says Austin is known as the SPAM Town as the canned meat Spam's headquarters are there...In the previous post about my friend Norm I mentioned SPAMMED Comments.
Mayo Clinic=166
Barney Murphy=166
The big number around his death.

I never noticed before now either that he turned off Hwy 71 going on a gravel road where he wrecked..
Catholic=71
Knights of Columbus=71
It just seems more fishy every time I look at it.

Posted by The Mindless Freaks(Dan Behrendt) at 7:30 PM