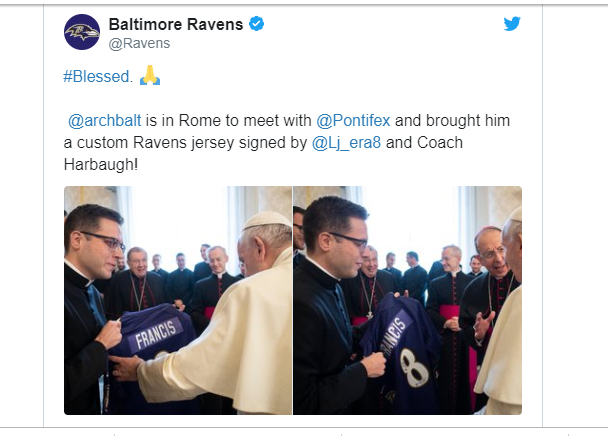 Of course it would be signed by John Harbaugh as well. The guy who has a birthday of 9/23...the important day that Pope Francis visited the US in 2015.

Notice this story comes 34 days before Jackson's birthday.
Ravens=34
Francis=34 and 47
Super Bowl 47 was all about the number 34 if you remember.
Joe Flacco=34 and 47...currently 34 years old. Remember on 3/4 after SB 47 they gave him a 6 year contract of 120 million making him the highest paid QB ever too....Flacco was traded to the Broncos this year on 3/13...the 6th year anniversary of Pope Francis being the Pope.
Ravens won with 34 points on the game played on the 34th day of the year....34 minute stoppage from Blackout.
Flag=34(Jewish)

Francis also became the Pope 38 days after the Ravens beat the 49ers in the Super Bowl held in New Orleans where the SAINTS play....all part of the riddle lol.
Ravens=38

If the Ravens do make the Super Bowl....remember how Youtube gave me a Copyright Claim on my Hairspray video that is all about Baltimore....plus Nancy Pelosi's brother, the former mayor of Baltimore dying...
Hairspray came out in the US on 7/20...Batman/Moon landing..

Don't forget how important Baltimore is to the National Anthem and the War of 1812 as well.

Posted by The Mindless Freaks(Dan Behrendt) at 11:54 PM