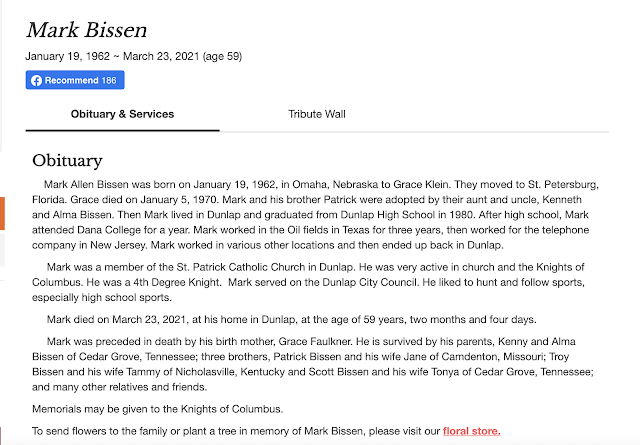 This guy died on Tuesday, but I didn't know about it until Wednesday...The crazy part about it though is that my mom and I were just talking about him at my job on Monday. I can't remember what brought him up...I think it was something to do with someone having to get surgery cause one leg is longer than the other...Mark always wore a giant shoe and I assumed it was because of this, but my mom said she thinks it was something to do with part of his foot being missing due to diabetes...anyway it's crazy that he would die the next day. When he died my co-worker came back and said, "You know that guy you are your mom were talking about yesterday...yeah he died"....My co-workers have been noticing synchronicities lately too , and I keep telling them that they should learn gematria as there is a bigger riddle with these things...Unfortunately, they just aren't ready to dig deeper, but I am glad they are starting to notice these things...
Anway, Mark was a good guy that would sit in the gas station and talk to me a lot. We also had this funny connection because someone once thought that we were brothers even though we aren't related and he was over 20 years older than me...we often had an inside joke and called each other brother....
He was also big into the Knights of Columbus and I always wanted to ask him if he knew about Gematria, but the timing just never seemed right.
He couldn't have died more perfectly though in connection to the Jesuit theme that I have mentioned since my Uncle Barney died though.

Notice he died 63 days after his bday..
Recall my Uncle Barney died age 63.
Father Paul died age 63 in a bathtub at the Jesuit residence of Creighton..He died 6 months 3 days after the Jesuit anniversary.
Father Paul=63
Father Jim=63
Father Fred died on the 63rd day of the year.
All the priests I remember as a Child...except for Father Howard the priest who got busted for molesting at the age of 63.
Father Howard was removed from priesthood by Pope Francis on 1/19, which was Mark's bday.
1/19  or 19/1
Society of Jesus=191
So many other things I have documented such as Father Howard being removed after 35 years..
Catholic=35
Howard Edward Fitzgerald=119

Notice Mark died 9 months 27 days before his next bday too.
The Jesuit anniversary of 9/27
Society of Jesus=56
Mark Allen Bissen=56 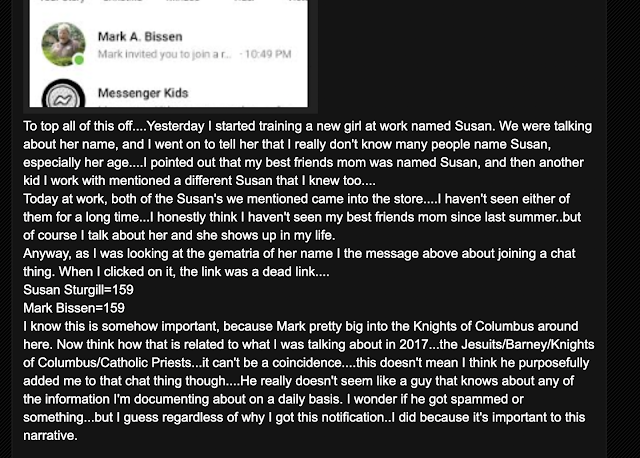 I also find it weird that I blogged about Mark on 6/23/2020 and in the post I also mentioned training a new girl named Susan....Oddly enough, Susan just quit a few weeks ago and now Mark dies soon after.
It's just crazy that he died and has bothered me a lot more than any other recent death of someone I know for some reason. I've always felt that odd connection that I can't explain with him and I think it had to do with the K of C narrative I've followed for so long. Now here he is dying by the exact thing I talked about long ago.
His brother is also married to my uncle Fred's ex-wife Jane...recall I had synchronicity with my uncle Fred in February...I think there's something more I am supposed to see with that...Fred will be 63 years old on 8/10/21 too.
Posted by The Mindless Freaks(Dan Behrendt) at 9:58 PM