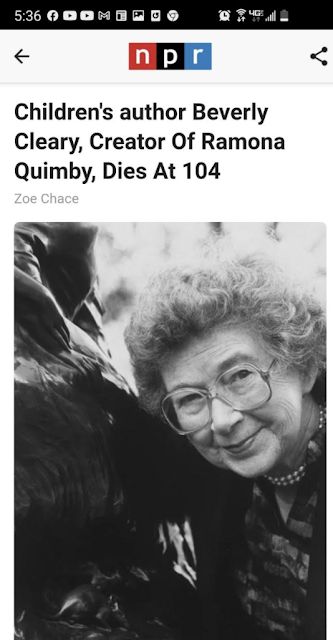 I made a video this morning about the death of Houston Tumlin and how it synced to my NASCAR/Royal Family narrative from 2019...In that video I mentioned how the date 9/19 has been important to Queen Elizabeth II since YouTube gave me a copyright strike on 9/19/2014...I mentioned how the video was about Ramona Quimby...I do have a playlist on this stuff on my channel too, which is why I didn't want to re-explain it...anyway here it is like 5 hours later and I get a notification on my phone that Beverly Cleary died yesterday....I had no idea lol...she is the writer of the Ramona Quimby books.
Ramona Quimby=201(FB) and 227(FB)
227 was the important number to France/Nascar in 2019..
Houston Tumlin=201
He died 201 days after Dale Earnhardt's bday.
In my old video I talked about Ramona Quimby Age 8....
Ramona Quimby Age Eight=104
Beverly Cleary died age 104..
I mentioned how I thought she would die age 102 in 2018 in a post that involved the Cuban plane crash...that whole post had a lot to do with the number 104...such as Fidel Castro dying 104 days after his bday....the plane had 104 passengers..
Fidel Alejandro Castro Ruz=104
I'm also curious about this considering the plane that skidded off the runway in 2019..it was coming from Guantanamo Bay(Maximum Security) and synced to the the horse Maximum Security being disqualified...recall that horse race was synced to Titus who is important to Mt. Vesuvius.

Cleary's first job was as a librarian in Yakima, Washington too...where Zach now lives...
My old video that involves Ramona Quimby also involved the Terry Gilliam film "The Adventures of Baron Munchausen"...in that film he stays with Vulcan and then dances with Venus who is Vulcan's wife...Vulcan then gets mad about it...This is all after the part with Robin Williams as the King of the Moon.
Terry Gilliam=201(FB) and 227(FB)
Brazil...which stars Jonathan Pryce(Pope Francis)
Time Bandits...
I need to think more on this death..
It is interesting that she died 187 days after 9/19..on the 84th day too.

Crazy that she died 6 years 6 months and 6 days after my video involving Ramona Quimby too..

Posted by The Mindless Freaks(Dan Behrendt) at 11:33 PM