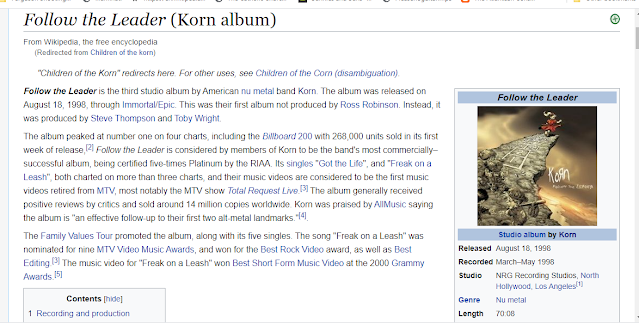 I don't remember exactly why, but at some point this weekend I remembered something important to the band Korn. They have a song with Ice Cube called, "Children of the Korn" on their "Follow the Leader" album. Notice that it came out on Roman Polanski's birthday too.

Reading more about this album it mentions a guy named Jim ROSE too. It even goes on to mention how Jim Rose toured with Marilyn Manson before he was famous.

In relation to Ice Cube and basketball, he is not only a Lakers fan, but also created the "Big3" league. Notice Clyde Drexler is the commissioner too...I mentioned him in regards to South Park/Houston. The Big3 created in 2017, the year much of what I have talked about is important to.
It doesn't have to be spelled this way, but still intersting..
Big Three=194(FB) and 282(FB)
Charles Manson=194(FB) and 282(FB)
Children of the Corn=282
I also find it interesting that the cover of Follow the Leader involves a "Cliff". Remember the Cliff theme was important leading up to the NBA strike and Cliff Robinson dying...Robinson played with Clyde Drexler in Portland..

I've also seen a few stories involving cliffs in the last week again too. A story about an Oregon Hiker...makes me think of Portland again....also a story of a man taking pictures in Arizona falling off a cliff. They then found other remains at the bottom.
RoseCliff?
Corn Cliff?
Cornrows?

Posted by The Mindless Freaks(Dan Behrendt) at 10:03 AM