Olympia Dukakis who is famous for the film "MOONstruck" dies just after Michael Collins?
She dies on 5/1...
Moon=51
You have to appreciate the article telling us that her brother "Apollo" announced the death.
Apollo...Moon Mission...Apollo 11
Her parents must have loved the Olympians.....naming her Olympia and her brother Apollo... 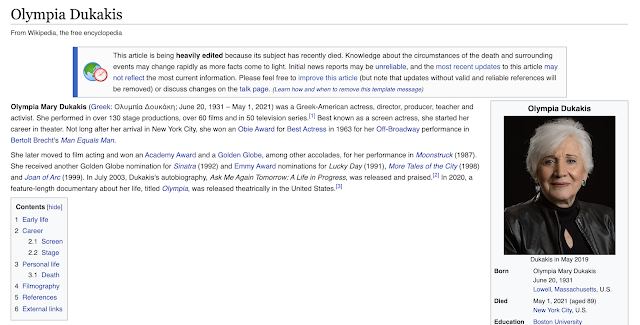 She even died a span of 51 days before her bday.

She plays the character of ROSE in the film Moonstruck too.
I feel like I should have seen this movie before but I don't think I have...maybe just looked at the cover before..

She is also the cousin of Michael Dukakis...the guy who lost to George HW Bush in the presidential election...Bush then went on the become president and the Space Race ended in that term.
Notice she died 186 days before his bday...
Michael Collins just died 186 days before his bday..
His bday is also interesting...it was the day of the 2020 election...
Also..
Moon=113(FB)

Posted by The Mindless Freaks(Dan Behrendt) at 10:04 PM