I keep randomly seeing the number 129 today at work..
I checked the pizza oven to see how much longer the pizza would be and it was 1:29, and there has been about 5 times now where I did the same with the fryer only to see 1:29....now I just checked my phone and it's 1:29pm

I have had zero time recently because I had to learn like 15 new songs for our gig tomorrow night, but I saw this story at work a few days ago...Chase Elliott is driving a tribute car to Alan Kulwicki at Darlington this year... this race is a throwback paint scheme, but it's odd to me that ESPN had a headline article of just Chase Elliott's car and not all the others...it reminds me of Dale Jr. doing the tribute to his father on 8/31/2019 in Darlington that I've mentioned again recently.... recall the number 129 was important to the Volcano/Talladega Nights symbolism..along with Chase Elliott...
Notice Chase is doing this tribute car on 5/9 at Darlington...
5/9 is the 129th day of the year.
They race again at Darlington on 9/5  too...59..95.. 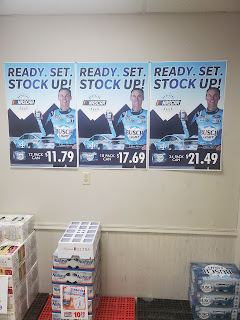 The only reason I even thought this may be connected is because earlier someone was fixing these posters...and I remembered the article about Chase Elliott...then started seeing 129 like crazy.
I need to look more at this when I get time.
Kevin Harvick=191, 264(FB)
Darlington=114 and 51
Today is 114 days after Harvicks bday and 5 months 1 day before the race at Darlington

Ha, oddly enough I just looked up Alan Kulwicki and today is his death day..28 years ago..
Volcano=28?

So Alan Kulwicki won  the 1992 Winston Cup in the Hooter car after the Hooters 500..although Bill Elliott won the race, Alan won in points to win the Cup...Davey Allison lead most of the year, but Kulwicki ended up winning..
Then in 1993 both Kulwicki and Allison died in separate plane/helicopter crashes?
Reminds me of Dale Earnhardt Jr's plane crash in 2019..then the death of Mike Stefanik in a plane crash a month later..

Interesting that this story about Kobe Bryant just popped up on my phone now too..
Kobe Bryant=41
Today is 4/1.
He died in a helicopter crash..
$2.6 million
Today is 2 months 6 days after the 26th day, which Kobe died on in 2020.
Bryant=26
Kobe always reminds me of Jeff Gordon..both #24 Gordon retired in November 2015..when Kobe announced his retirement.
Gordon's first race was the 1992 Hooters 500 where Kulwicki won the Cup..
Gordon also born on 8/4, the same day Talladega Nights came out.
Gordon Is also 49 years old right now...49th prime is 227.. the big number I talked about in 2019...Earnhardt Jr's plane crash was on the 227th day even..
It seems there is some narrative here with aviation crashes..Nascar..France..the Royal Family...
5/9 is even a span of 2 months 27 days before Gordon's bday.
Jeff Gordon=152(FB)
I'll think about this more when I'm off work...Jasmine just text me and said my car that her mom drives broke down now too lol...so that's car number 4 in a little over a month..

Posted by The Mindless Freaks(Dan Behrendt) at 4:49 PM