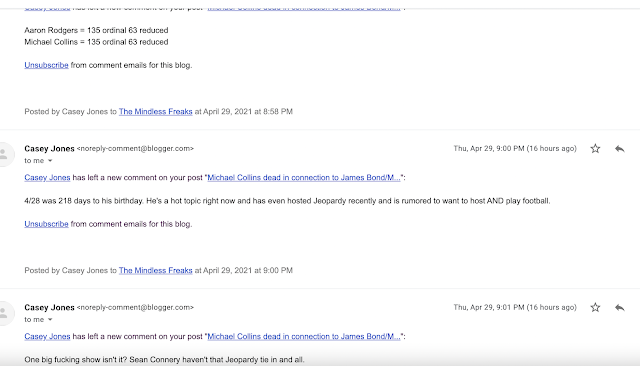 Ha, just checked my email to see this comment. It really is perfect considering the connection to Alex Trebek/Jeopardy and Michael Collins dying..synced to James Bond/Sean Connery.
The day after Michael Collins died the major news was how Aaron Rodgers doesn't want to play for the Packers anymore...
Recall a big piece to the James Bond/Batman narrative was the RV bombing on Christmas by the Batman building in Nashville....then the Tennessee Titans played the Green Bay Packers 2 days later....of course Bobby was synced to Nashville and Derek lives near where the Packers play.

Rogers guest host appearance on Jeopardy also began 148 days after Alex Trebek died.
There has to be a connection to the Native American theme too...recall in November I talked a lot about the Packers synced to the Native American theme due to Wikipedia changing Matt LaFleurs bday....
Aaron Rodgers being engaged to Shailene Woodley sticks out...she was in the Divergent film in 2016 and then got arrested at the Dakota Access Pipeline...when the Cubs were playing the Indians in the World Series...Divergent is about Chicago.
Native American=135
Aaron Rodgers=135
Michael Collins=135
Aaron Charles Rogers=201 and 312(Jesuit)
4/29 is a span of 201 days before Woodley's bday.
Trebek's death to 4/29 is 172 days.
Shailene Woodley=172

Posted by The Mindless Freaks(Dan Behrendt) at 2:10 PM