I saw this article on the top of CNN yesterday on my phone.
It's just mocking the world and at the same time training them to believe in "coincidence" rather than see this happens all the time.

In 2014 I was looking at some stuff about Ebola and James Monroe and I noticed that he died on July 4th. I thought to myself that's interesting a president that died on July 4th of all days. I then discovered that 3 of the first 5 presidents died on July 4th....Now think about the odds of that....
Not long after I discovered/or someone in my comments showed me that John Adams and Thomas Jefferson died on 7/4 in the year 1826....then James Monroe died exactly 1,826 days later.....
This is the stuff the media doesn't tell you about....

I mean the odds are insane for this to happen, especially considering only 44 people have been the president. It's like how there are only 15 new people in Skull and Bones every year yet we had Bush and Kerry running against each other for president.

There's just too many coincidences that happen constantly. I can't believe so many people dismiss it, yet articles like this are a big contributing factor.

July 4th....Or 7/4...
Independence Day=74
Holiday=74
Masonic=74
Our whole nation created on Freemason principles, it's why Washington DC is named after the 33rd degree Freemason George Washington.
Oregon=74 and the 33rd state.
Jesus died age 33...
33 vertabrae that the Kundalini wraps around...
33 permutations of consciousness in the Tree of Life.
33 pillars on the Freemason Headquarters in DC.
33rd degree is highest in Scottish Rite..
July Fourth=156
Thirty Three=156

Jesus=74=Cross=Messiah=Gospel=Joshua=Yshua=Lucifer=Muhammad
Notice how they died on the 50th anniversary of the Declaration of Independence as well.
America=50

This is why reflections of numbers are important as well.
74 and 47...
The Freemason Compass set at 47 degrees.
Euclids 47th problem about Foundation of the perfect square.
Foundation=47
President=47=White House=Government
George Washington Born on 2/11.....211 the 47th prime number.

It's also why the presidents to die were the 2nd, 3rd and 5th.
Each side of the Freemason compass is 23.5 degrees syncing up the Tropics located at 23.5 degrees North and South.

To add even more to the supposed "coincidence" another president was born on July 4th.
Calvin Coolidge....CC...33
He was born on the 96th anniversary of July 4th.
Freemason=96, 147(reverse)
Fourth of July=147
I like how he became president on 8/2 after the death of Warren G. Harding too.
The Declaration of Independence was approved on July 4th but was supposedly not signed until August 2nd....

This is what our media does too. They tell us that Jefferson and Adams started talking again and wrote each other over 185 letters. I mean why not just say about 200? 185 is specific because July 4th is the 185th day of the year.
Notice Calvin Coolidge died 185 days after his bday too. 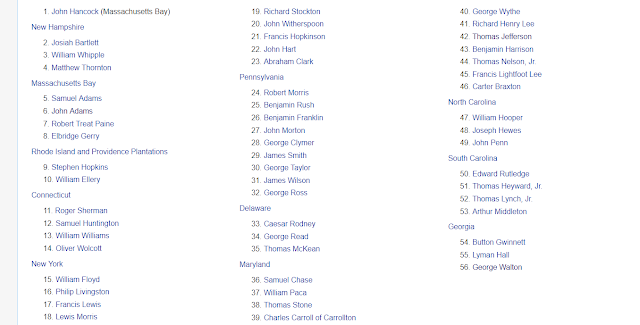 Another prime example of history scripted by the numbers...
56 signers on the Declaration of Independence.

The last living signer on the Declaration was Charles Carroll who died 56 years after 56 people signed it. Notice he also died 56 days after his birthday too.
He was also a Jesuit.
Society of Jesus=56
Pope=56
Posted by The Mindless Freaks(Dan Behrendt) at 12:45 AM