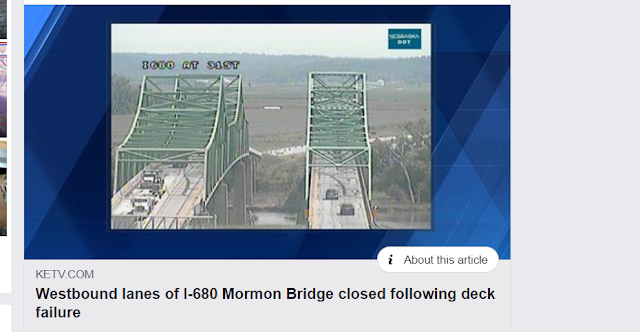 I just saw this story about the Mormon Bridge being closed due to a pavement failure today.
I'm just interested that I even saw this story while looking at my Facebook feed as not too long ago I mentioned this bridge.
I also mentioned earlier this year about Alex Smith leaving the Chiefs(Indian) to play for the Redskins(Indian)...this story just after the Indians getting rid of Chief Wahoo.
Alex Smith went to college at UTAH(mostly Mormon school).
Andy Reid is a mormon....
Also in 2016 when I was talking about the Indians it was connected to the area I live in regards to the Omaha Indians.....the Mormons came to this area because of an illegal treaty with the Omaha Indians as they thought they would get protection from the Sioux.

Also the Mormons believe the native americans are actually the Lamanites who were cursed by God with dark skin. They came to America from Jerusalem and split into the Nephites and the Lamanites with the Lamanites breaking away from god supposedly.

Posted by The Mindless Freaks(Dan Behrendt) at 10:44 PM