A lot of times during a championship there is a previous death that connects to the champion. I know North Carolina seems like the team to win the NCAA Tournament this year, but I just want to point out some things I noticed in case they don't win.
On December 10th 2015 we got the death of former SYRACUSE National Dolph Schayes.  The Syracuse Nationals are the team that turned into the Philadelphia 76ers.  Philadelphia had been coded to so many events this year it's not even funny. 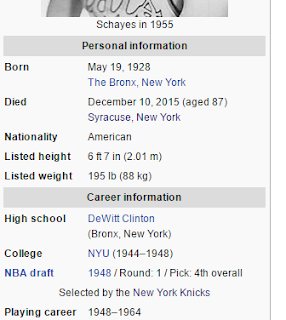 Schayes even was the 4th pick in the draft and Wore # 4. 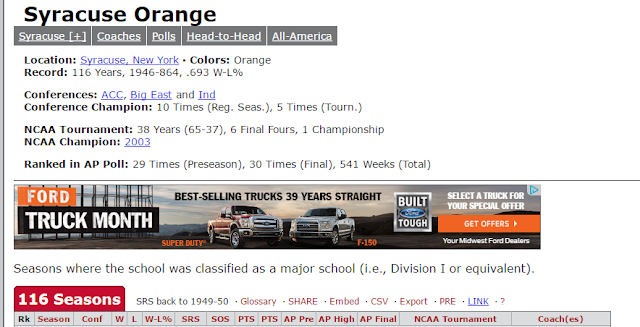 Syracuse is in their 116th season.
Notice Syracuse has 65 right now all time in the tournament.  If they win the Championship they will have 67 Tournament win.

The Nationals/76ers are in their 67th year in the NBA.
Philadelphia come from the Book of Revelation.
Revelation=67

Syracuse makes the big comeback to beat the Virginia CAVALIERS to advance to the Final Four and play North Carolina.
Final=24=X
Four=24=X
So interesting Final Four has the XX theme too.

A Cavalier is a follower of King Charles in the English Civil War.
Also Cavaliers opponents were Roundheads who supported "Long Parliament"=67
Anyway now Syracuse is facing North Carolina.

The Carolina's are named after King Charles I.
What sticks out to me is that during the English Civil War King Charles I was Executed and his sons Charles II and James II both were exiled/fled to France.
This makes me think it's not such a good thing to be anything associated with King Charles.  Even the Panthers (North Carolina) lost the Superbowl.
Also that the Championship is held in Houston.
Houston=51
Charles I executed in 1649  and his Sons went to France in 1651 after Oliver Cromwell defeated Charles II.  So English Civil War ends in 1651.
King Charles II did return though in 1660 to become the King after Oliver Cromwell died.
So makes me wonder too in regards to the Cleveland Cavaliers whose leader is even King James like the Son of King Charles.
Lebron James=51
Cleveland=51
Cleveland Cavs=51
Cleveland hasn't won a sports championship in 51 years.
Syracuse Nationals first NBA Season was 1949  They won 51 games.   The only title Nationals won was against "Fort Wayne Pistons"=239
Earl Lloyd was on that team as well. He died on 2/26/15.  The same day the Cavs beat the Warriors 98 days before Game 1 of the Finals that went to OT 98-98. Warriors 108 to 100.
Cleveland founded by Moses Cleveland.
Moses from the Bible made it to the end, but never got to enter the promised land. He died age 120. So maybe 51 is just saying making it, but not finishing?

The Cavs also played the Lakers and KINGS twice this season. They were both games right after each other too. Notice the Cavs scored 120 in all 4 of the games?
One Hundred Twenty=80
King Charles III=80

It was called "Popish Plot"=56, 146
Both numbers I keep seeing and connected to Philadelphia.

This guy was Pope during the Popish Plot. Interesting he is the 240th Pope and we are heading into the 240th year of the US.
Also his name is Innocent lol, yeah I'm sure he was.

King James II was 2nd Son to of King Charles I to become King.
He became King after Charles II died.  He was the last King of England to be CATHOLIC.  Also abdicated his thrown by fleeing after an Invasion by William of Orange.(Syracuse Orangemen). That's how it connects to Syracuse.

So William of Orange basically got rid of Catholics to the throne.
So Who knows maybe the whole point is to bring in Prince Charles to be King Charles III? It seems to me it's the other way around though. William III also died age 51.

Anyway on with the NCCA Tourney stuff.
If Syracuse wins the Tournament it will be on their 38th game of the season in their 38th NCAA Tournament.
Thirty Eight=68

They also beat Virginia Cavaliers scoring 68 points. Game was on Easter=23, 68
The comeback led by # 23 Richardson who scored 23 points.
Notice too the 1st game of the tourney they beat Dayton who scored 51 points.
Then 15th ranked Mid Tennessee 15 days before 4/4.
Fifteen=38, 65
Philadelphia=65
Beat Gonzaga 63+60=123  a Number paired with 51 a lot.
Conspiracy=51, 123.
Then Virginia connected to Cavaliers/51
Now North Carolina on "April Second"=116
Syracuse upsets North Carolina=116
Dolph Schayes dies 116 days before Championship.
Syracuse in 116th season.
North Carolina=67
North Carolina Tarheels=101=Philadelphia
Interesting UNC still might win too like I said in the beginning.

The team they would play is either Oklahoma or Villanova.

Villanova of course in Suburban Philadelphia. Also says it straddles Lower Merrion and Radnor Township.
Kobe Bryant went to Lower Merion High School. Kobe Super Connected to the Pope/Warriors/Basketball/Revelation.
Villanova also won the tourney in 1985 which a lot of significant things have been connected to this year. Superbowl/World Series/Back to the Future.
Back to the Future III even goes back 131 years.
They use Train 131 to push the Delorean.
One Hundred Thirty One=107

So who knows, just felt like posting this in case North Carolina does lose.  It could just be what I've suspected for a while that Prince Charles will soon become the King and Cavs and North Carolina will win. With the 51 connections though it seems as if the story is only up to the End of the English Civil War though.